After Paddy Pimblett and Ilia Topuria almost brawled in the fighter hotel leading up to UFC London, it should be no surprise Pimblett was hoping Topuria’s opponent Jai Herbert would win in the O2 arena on Saturday night.

Unfortunately for Herbert, that’s not what happened. Topuria survived some early trouble to knock his opponent out in the second round, earning one of nine performance of the night bonuses.

Asked about Topuria’s victory at the UFC London post-fight press conference, Pimblett admitted the knockout was impressive, but refused to give ‘Mr. Hand Sanitizer’ too much credit.

“I did [see it]. I give him his due, it was a good knockout, it was. It was a very good knockout, especially after taking that headkick in the face. If I hit him with that headkick, I’d finish him. But as I say, he’s just ‘Hand Sanitizer Boy’ to me. The lion doesn’t concern himself with the opinion of sheep.”

Take a look at the first round headkick Herbert landed on Topuria:

The win over Herbert didn’t convince Pimblett that Topuria deserved to fight him, though.

Ilia Topuria followed up on his big knockout win over Jai Herbert by calling out Paddy Pimblett in an expletive laced post-fight interview.

“England, love you guys. Your guy here, he’s a f**king — Paddy Pimblett, win or lose I wanna fight you next and kick your ass like I did the last time. F**k you!”

His final words before leaving the octagon left no doubt as to who he wanted next.

The callout did not go over well with the UFC London crowd, who were already unhappy that Topuria had knocked out their fighter Herbert from Wolverhampton, England. 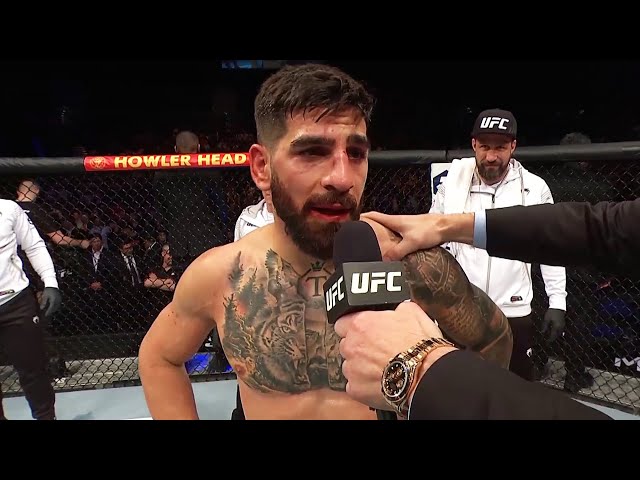 “He is good at speaking cocky, however not at combating”